Guidance for the use of Fire Investigation Road Maps

The following 23 Fire Investigation Road Maps (FIRMs) are to be used collectively and not in isolation, almost in a three dimensional function. They relate to the investigation of the cause of fires and non-terrorist explosions, however ‘fire’ is
used as a standard term, which may relate to either/or. There are 12 FIRMs relating to non-human agency subjects and 11 FIRMs relating to people. Many of the FIRMs will interact with each other, but their rigorous application during the
investigation will allow all available hypotheses to be established, tested and either confirmed as possible or dismissed.

When addressing any human agency involvement with fires, it is the role of the person associated with that fire that should be considered. Much of the data to be obtained from a person associated with a fire is generic, such as ‘do they know how the fire started?’ however, there are decision points within each of the ‘person’ FIRMs that are specific to that category of person, such as ‘would this person have benefitted from the fire?’ Every FIRM should be referred to at least once whilst the investigator is still at the scene as any evidence ‘left at the scene’ may be lost at the scene.

The FIRMs have been developed to guide and assist the investigator through the complex thought process of what can the most difficult of investigations. Demonstrating what was not a possible potential causation of a fire may prove to be as important as what was possible. It may be risk critical to an investigation if the FIRMs are not completely followed through to their final decision ‘boxes’; their superficial application would not be suitable, sufficient or acceptable given the methodology that they are promoting. As with any road map, an investigator may choose which route is to be
followed, based on facts uncovered along that route.

Each decision box within the FIRMs is numbered and has supporting textual guidance, which is not finite, to explain some of the issues that the investigator should be addressing. These FIRMs are not designed to replace or detract from the active use of other published documents and guides, such as NFPA 921 or Kirk’s Fire Investigation as examples, but to support the structure and application of a competent fire investigators’ methodology. They are also not designed to be a ‘tick box’ approach to fire investigation but will certainly give the investigation credence due to their scientific methodology. 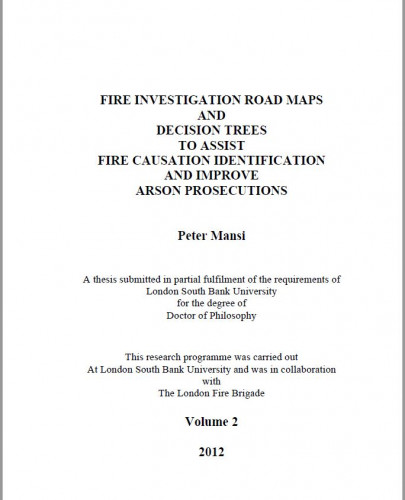