IMPORTANT Appointment to the role of Forensic Regulator

A range of mattresses imported by Ventura from a Chinese supplier will later today be identified by the BBC as falling below UK Fire Standards.

However it is becoming apparent that not all mattresses supplied to Ventura actually met the specifications in the standard.  At this stage it appears that either the test certificates were wrongly issued or that a number of mattresses were manufactured using materials not compliant with the test certificate.

In the meantime, we are recalling mattresses possibly affected and have withdrawn from sale all those from the relevant manufacturer.  We are also reviewing both our own testing procedures and the safety certificates of all the mattresses within our stock (regardless of supplier) with the UK Trading Standards Authority.

In addition, we have also sent representatives to China to meet with both our supplier and with the local testing facilities to fully investigate the situation.  In this investigation we will be working alongside and co-operating fully with appropriate Chinese authorities and local British trade representatives.

We apologise for any inconvenience caused and can assure that the safety and security of our products and of consumers is fundamental to our business and philosophy and we will do everything we can to understand how this situation occurred and to take appropriate action.

To identify whether or not you have an affected product, you will need to identify the Batch Number. The Batch Number is located on one of the silk care/warning labels. These are found on the underneath of the mattress at the head end in the centre. These will be sewn into either the seam or  into the piping depending on which type of mattress you have purchased.

A Batch Number is a four digit code e.g. Batch No: 1234. Please use the list below to identify your product, the image below shows where the label is located and shows two example labels to help you find  your Batch Number.

Which Mattresses dose this apply to:

All the mattresses involved come from one supplier and were made from the end of 2011. They are marked Sleep Secrets, and will have a batch number on the care label that is permanently sewn to the mattress, usually at the foot end. We have a list of the production batch numbers that were affected on our web site. It is only some of the production that has been affected, but we have taken the precaution of including all production from a certain date, at which time we are sure the production was compliant. 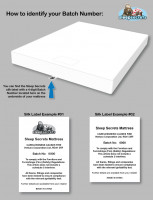